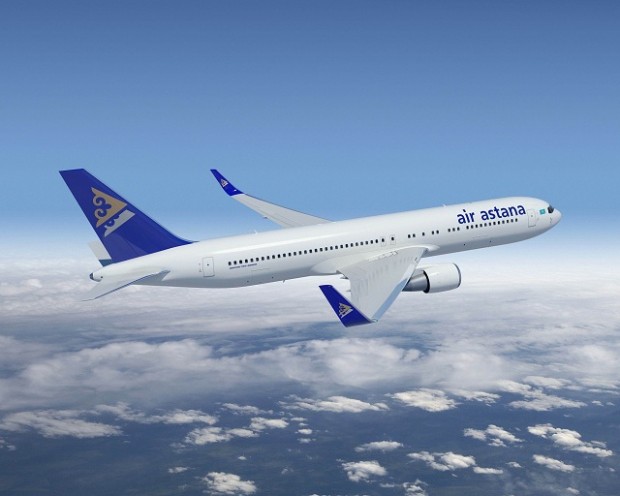 Nick Walton revisits one of his favourite airlines on a red-eye flight with Air Astana from Almaty to Bangkok.

Kazakhstan’s national carrier, Air Astana is the little airline that could. A coveted Skytrax four-star airline, Air Astana regularly thrills guests with levels of service rarely seen today, even on the market leaders.

Check-in at Almaty International Airport for the Air Astana flight from Almaty to Bangkok was a painless process but due to an odd disagreement between the airline and the operators of the airport’s sole international departure lounge (which Air Astana business passengers have access to but which charges for virtually everything) we set up shop at one of the cafes situated in the main departure hall. If you have time on your hands, take a look through the surprisingly good duty-free store nearby.

I’ve departed from Almaty a number of times and in many instances, it’s been a chaotic boarding process, especially when you need to take a bus out to our aircraft. Fortunately, boarding the Boeing 767-300ER for our Air Astana flight from Almaty to Bangkok, one of the last of the Everett factory line, was also painless, with an air bridge priority line giving business class passengers a quick escape from the crowds.

My previous international experiences on Air Astana had always been on the airline’s A320 and 757 fleets, and first impressions of the 767 cabin were one of space, elegance and privacy, especially when it became apparent that I was sharing the 30-seat strong cabin with only a handful of passengers. The cabin, which it lit with indigo mood lighting, features seats in a 1-2-1 configuration, with window seats featuring staggered armrests, meaning if you’re a window seat lover like me you’ll want to get one of the seats with the armrest on the aisle side.

My seat, 1K, on the starboard side, featured a large entertainment screen, a wide armrest to the left, a small pouch for little travel essentials, a reading lamp, and controls for the seat position and entertainment system. There’s also easily accessed USB and AC ports at shoulder level, as well as a headphones jack. Although a pair of headphones was provided, I opted to use my own Bose QuietComfort 35 IIs.

Unlike the 757 product, the 767 features a true lie-flat seat, which is ideal for the 7-hour flight from Almaty, around the Himalayas to Bangkok, although I could have done with another inch or two at shoulder level when in bed mode. 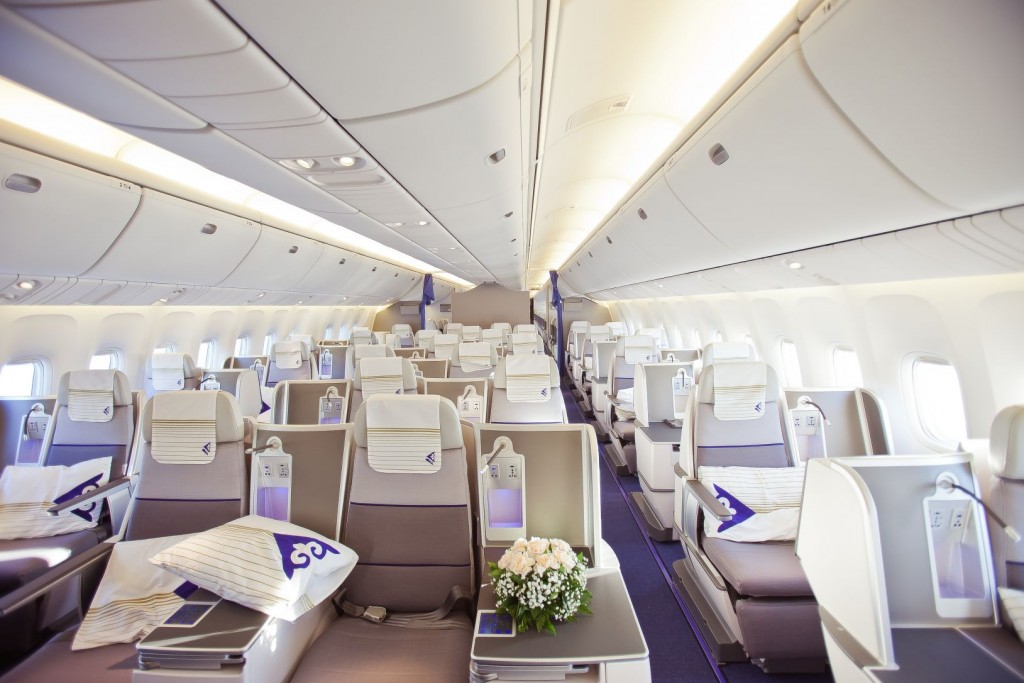 Before take-off crew offered glasses of sparkling wine and fruit juice and even came back to refill my glass as we prepared for departure – something that’s far rarer than you’d expect in the business class cabins of the major players.

A beaming cabin attendant offered me an amenity (Air Astana take their kits very seriously) packed with essentials like a toothbrush and toothpaste, an eyeshade and comb, socks and earplugs, moisturizing products by Payot and, always handy but often forgotten, a pen. She also asked if I would prefer dinner served immediately after take-off or if I would like to wait and have it later in the flight. As this was a late evening departure, I decided to get cracking so I could get some sleep before arriving in Thailand.

My pre-dinner drink – a Kazakh Snow Queen vodka and soda – as well as a choice of nuts and a fragrant hot towel, was served by the purser, Yedil, who introduced himself to each guest and offered to cater light and temperature levels (another first).

Dinner this evening began with an appetizer of lemon, garlic, and sesame seed tiger prawns on betel leaf with salmon roe, hoisin, and fresh lime; and a lettuce leaf salad with tomato salsa, fresh basil and avocado. The prawns were perfectly cooked and suitably zesty and were followed by a butternut pumpkin and coconut soup with paprika-garlic croutons, a great blend of east and west.

I decided to skip the offered cheese plate and pandan, mango and coconut gateaux in lieu of some shut-eye. After several hours of deep sleep, I returned from the bathroom to a double espresso (how did you know!) and immigration forms for Thailand, perfectly timed for our descent. 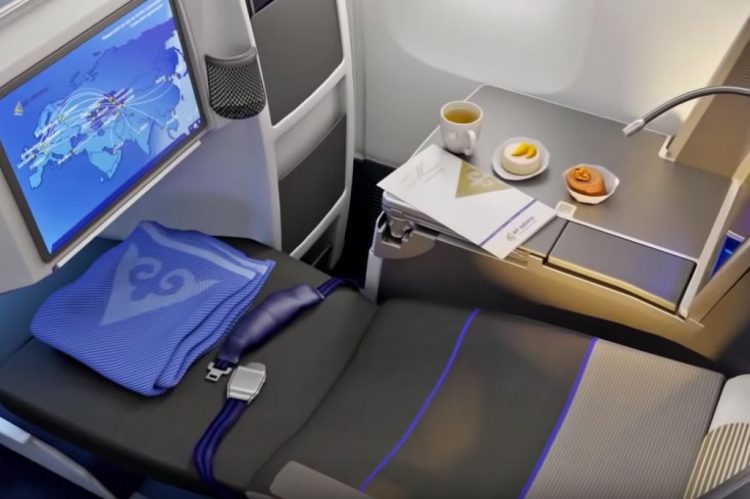 Of all the things Air Astana gets right – and there are a lot of them – service is the most obvious one. Despite being a relatively small carrier, service levels are consistently excellent, in business class and economy (based on our numerous flights in both) and even with our late departure time from Almaty, the crew were upbeat, professional, patient, charming, and elegantly presented in their pressed grey uniforms.

In fact, with so few passengers in business class, service was more akin to what you would find on a private jet, with dinner served quickly and efficiently after takeoff (I really don’t understand airlines that operate red-eye flights only to take hours to serve what is usually an average meal), and breakfast served quietly and equally efficiently 90 minutes out from Bangkok. Evidently, the airline has spent a lot of time and money on service and its efforts are consistently paying off.

The IFE system on Air Astana is another surprise; the collection of films and television shows is quite extensive, and the system was easy to navigate. I loved the flight path maps, which showed our progress as we hugged the expansive Himalayas south and then east.

As with other flights we have reviewed, Air Astana has shown what a small airline is capable of, with a winning combination of hardware and software that’s punctuated with world-class service and true Kazakh hospitality.

Fly Air Astana from Bangkok-Almaty return in Business Class from US$3,375 per person. www.airastana.com

Check Out Our Other Reviews…