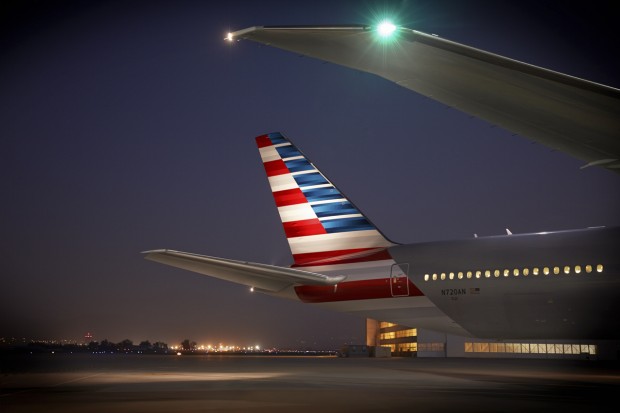 American Airlines continues to offer a world-class Trans-Pacific experience, linking the US and Asia with a thoroughly modern, user-friendly product that allows for travellers to arrive refreshed, discovers Nick Walton on a recent journey from Hong Kong to Los Angeles.

American Airlines’ direct route between Hong Kong and Los Angeles is one of the airline’s newest Trans-Pacific services and offers business travellers in Asia access to the carrier’s extensive network across both the US and South America.

We checked in using the American Airlines app, which I’ve always found to be one of the better airline apps. We were able to designate our seats at the time of booking, select meals in advance, and track the status of our flight. We checked in our luggage at a dedicated counter at Hong Kong International, where three counters (one for first-class, one for priority and one for economy) catered to long lines of passengers. Although there seemed to be some kind of computer glitch slowing things down, there was certainly no sense of urgency among the check-in staff and we waited more than 20 minutes to deposit our bags.

After security, we made our way to Cathay Pacific’s The Pier lounge near gate 65. As a member of oneworld, premium passengers on American can choose from several lounges at HKG, including Cathay Pacific’s The Wing, The Pier, The Cabin and The Bridge, and Qantas’ signature space near gate 15. The Pier, Cathay Pacific’s newest space, is a joy to visit, with plenty of intimate seating spaces, a separate bar, tea house and noodle restaurant, and great views across the apron.

The boarding process onto the 777-300ER aircraft was efficient considering it was a full flight and once we found our seat crew served sparkling wine in plastic glasses, a curious pre-takeoff exception – American uses real glasses as soon as you leave the ground. The American Airlines 777-300ER out of Hong Kong features a three and a half class configuration that includes eight seats in Flagship First, 52 in Flagship Business, 28 in the airline’s newly-launched premium economy (said to be one of the best in the market at the moment), and 216 in economy, including 28 in Economy Cabin Extra, which feature a little more legroom.

At my seat, J11, I found a thick mattress topper, blanket and pillow, all part of American Airlines’ new collaboration with sleep gurus Casper, as well as a bottle of water and menu. Crew offer pyjamas, also by Casper, but curiously not the carrier’s Cole Haan amenity kit (although it was offered on the way back).

With just over 300 passengers to settle in, the boarding process was quite long, and I did feel a little Oliver Twist-esque when I asked for a second glass of sparkling wine, but the patient cabin crew managed to find me a refill as they prepared for departure. A very pleasant young attendant named Cody took dinner orders and enquired if I would like to be woken for “breakfast” but as we were arriving in L.A. at 6 pm, I decided to skip the American breakfast offered. 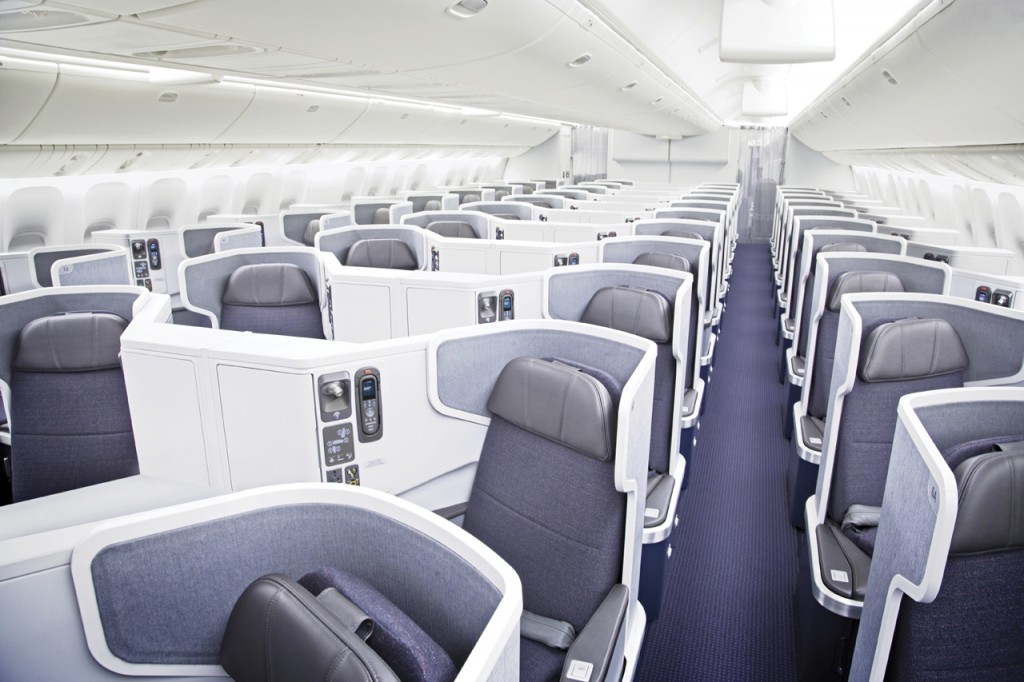 You’ll fly American Airlines from Asia for three major reasons – the network, the alliance and the hardware. While the airline’s service levels have long been lamented, the carrier’s investment in lie-flat business class seats has catapulted them to the ranks of the world’s best. There are two Flagship Business cabins on the 777-300ER, the main one with 44 seats and a second with just 8 seats, both in a 1-2-1 configuration.

The business class seat is very similar to that found on Cathay Pacific’s 777 long-haul fleet and offers just the right mix of comfort, functionality and privacy. All passengers have direct access to the aisle – I know, you’d think this would be standard on long-haul flights by now, Korean and Emirates, we’re looking at you – as well as plenty of storage space for all those little essentials you need to survive 14 hours in the air. I especially like the window seats, which feature two windows per passenger, easy-to-reach AC and USB ports at elbow level, and a shoulder-level cubby hole, where American stores its signature Bose QC25 headphones. These are some of the best in the skies, although they’re starting to show a bit of wear and tear in the connections and need to be fiddled with to avoid static feedback.

What you need on a long-haul flight like Hong Kong to Los Angeles is a decent bed, a decent monitor and a bit of privacy and the American product on the 777 ticks all the boxes. In bed mode, and when coupled with the Casper mattresses, the seat offers arguably the best sleep I’ve had at 38,000 feet, while the large 20.5-inch monitor offers a private cinema experience that you can enjoy in solitude thanks to a wraparound seat shell design. Unfortunately, my monitor was broken and wouldn’t latch back into said shell – crew apologized and pointed out that had the former occupant of my seat advised them they would have had a chance to get it fixed. However, once we levelled off it didn’t pose much of a problem. 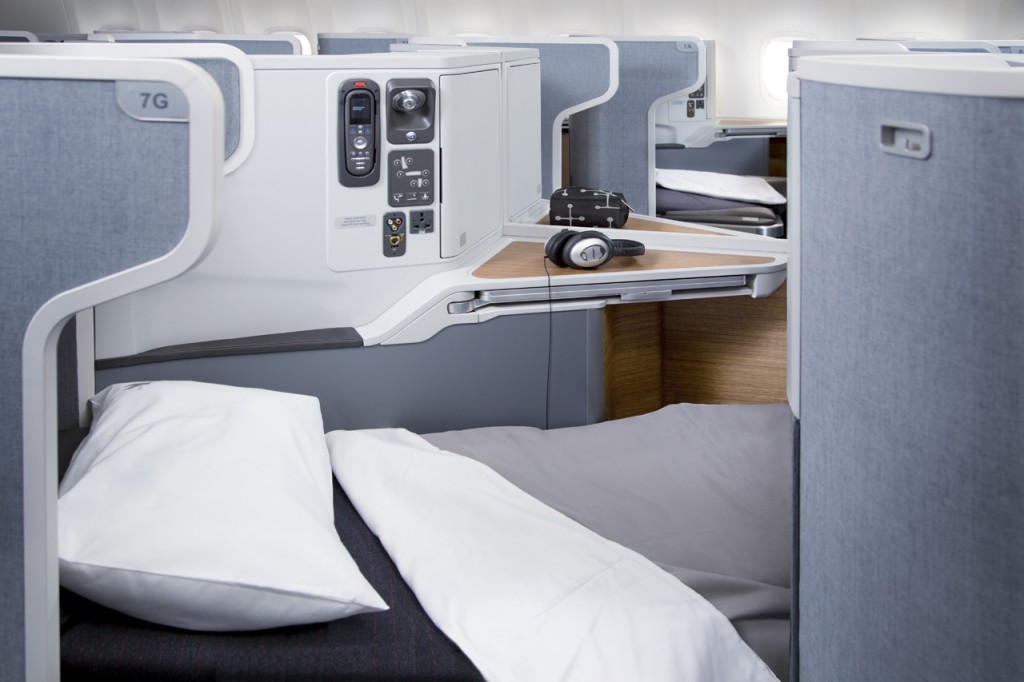 Coupled with the monitor problem is an issue with the entertainment system as a whole. Soon after takeoff, my screen froze and it took a bit of perseverance to get the attention of a crew member, who promised to reset it. In the end, the whole system was reset as screens all around me froze (interestingly the same thing happened a few hours later and also on our return flight so it might be time for a tech upgrade). Once the system did operate as designed, it offered access to a comprehensive collection of films, television shows and audio tracks, as well as some great interactive route maps (although I do miss the tail camera you get on some of the newer aircraft).

After takeoff crew began the dinner service. Instead of taking drinks orders from each passenger as the likes of CX and Finnair do, AA continues to do the trolley bar thing, which works just as well but often takes a little longer. That said, the trolley is the kind of thing you wish you had in your living room and offers a great selection of spirits, beers and wines selected by wine consultant Ken Chase that included Innocent Bystander Pinot Noir from Central Otago in New Zealand; Benziger Family Winery Cabernet Sauvignon from Sonoma and a great Quita do Noval port from Portugal. I went with a Woodford Reserve bourbon and water and the cabin attendant left me with an extra miniature bottle so that I could top myself up, which I thought was both nostalgic and thoughtful.

Dinner started with a roasted Okinawan potato ‘boat’ with pearl couscous and feta salad, and the airline’s signature side salad, which is usually a huge clump of greens in a tiny dish with no way to really dress it with the choice of spicy Shaoxing wine vinaigrette or “Chinese” vinaigrette (as if Shaoxing wasn’t Chinese enough). Kudos for a decent portion but perhaps the side salad needs elevation.

This was followed by a choice of stir-fried beef with flat egg noodles, Chinese black pepper and garlic; a herb-crusted stuffed chicken breast with white bean and potato mash, pumpkin, and a cheese sauce; prawns and scallops with broccoli gratin, mushroom wild rice and a Provencal sauce; marinated fried tofu steak with egg noodles and lo sui sauce; and a rather eclectic mezze plate with grilled eggplant, pang pang chicken, kimchi tofu, fried sesame dumplings and roti prata. Mid-flight bites that passengers could order included the same mezze plate and pork chop and onion sliders with lettuce, tomato and pickles.

I opted for the chicken, which was perfectly cooked and proportioned. Dessert included a five-spice chocolate cake and a cheese plate that included Munster Haut de Mon Village and Pecorino cheeses. However, if you have room, you’d be crazy not to try American’s signature ice cream sundae, which features vanilla ice cream, hot fudge, caramel, seasonal berry toppings, whipped cream and chopped pecans, and which is only available on flights into the US. 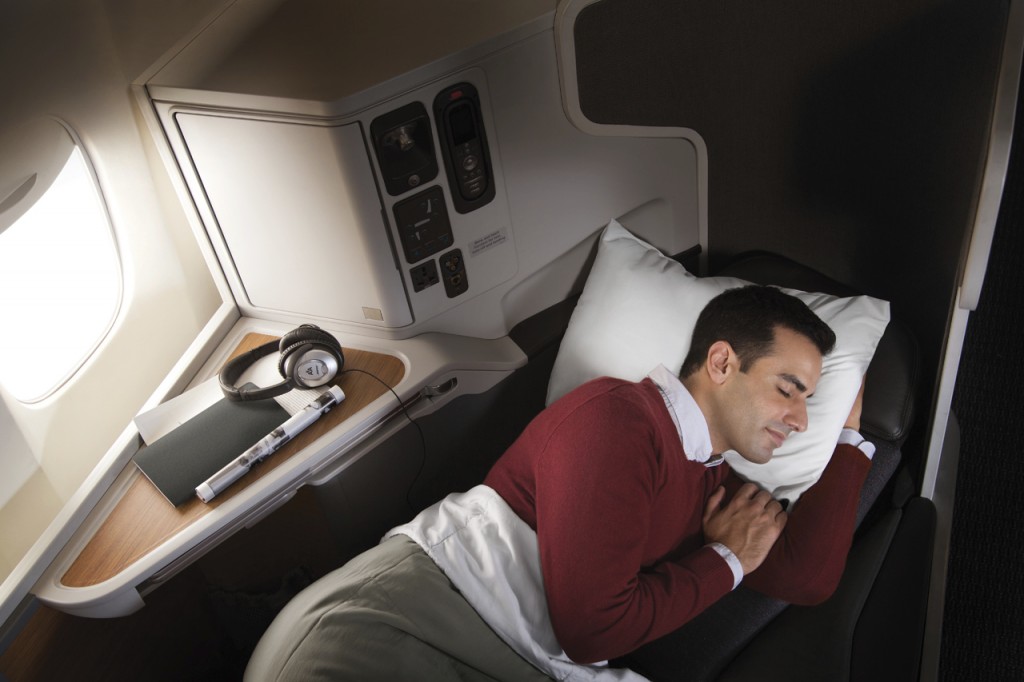 All American carriers have a bit of a bad reputation when it comes to service, especially when compared to airlines in Asia (although some of the big names here are also slipping) and while we’ve been at the receiving end of some of that lacklustre attention, crew on this flight were upbeat, attentive and above all present, ensuring passengers remained hydrated and sated throughout the 14 hour flight. The self-service counter on the 777, which serves a range of cheese plates, mezze style snacks and sandwiches, helps passengers also fend for themselves but whatever American is doing in terms of ridding itself of its service demons, it appears to be working.

This was my eighth Trans-Pacific journey in American Airlines’ Flagship Business cabin (if you want to see what Flagship First is like check out our review here) and I’ve found the hard product to be consistently brilliant. Differing from Asian carriers, American Airlines crew are happy to leave passengers to their own devices, which works perfectly for me as I’m a huge fan of privacy and me-time on long-haul flights and as the carrier works on its software, the experience is only going to get better.

American Airlines flies daily services from Hong Kong to both Los Angeles and Dallas-Fort Worth.

Note: The author travelled on a full-fare business class ticket without the airline’s knowledge