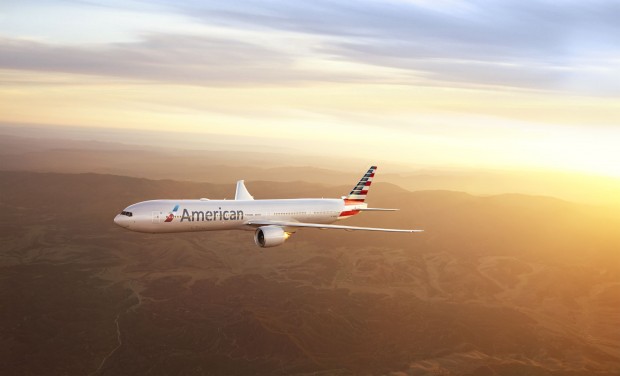 Leave Hong Kong as Happy Hour ends and arrive in La La Land in time for sundowners on the ‘Happy Hour Express’, American Airlines’ newest direct service between the US and Asia. By Nick Walton

American Airlines commenced its newest Asia route between Hong Kong and LA in September 2016, giving travellers from Asia access to the airline’s extensive network of destinations across North, Central and South America.

While I also enjoy using American Airlines’ surprisingly good app for real time info, I checked my bags the old-fashioned way, at the dedicated Priority counters at Hong Kong International Airport, where the staff were cheerful and efficient. A gate had not yet been allocated for my flight, so I had the pick of oneworld lounges, including Cathay’s The Pier, The Wing, The Bridge and The Cabin. I opted for Qantas’ signature lounge, which is located directly after immigration and above gate 15. This remains one of my favourite lounges at HKIA; the whole space has the ambiance of a refined Sydney restaurant, right down to the great wine list and Rock Pool salads, soups and snacks. 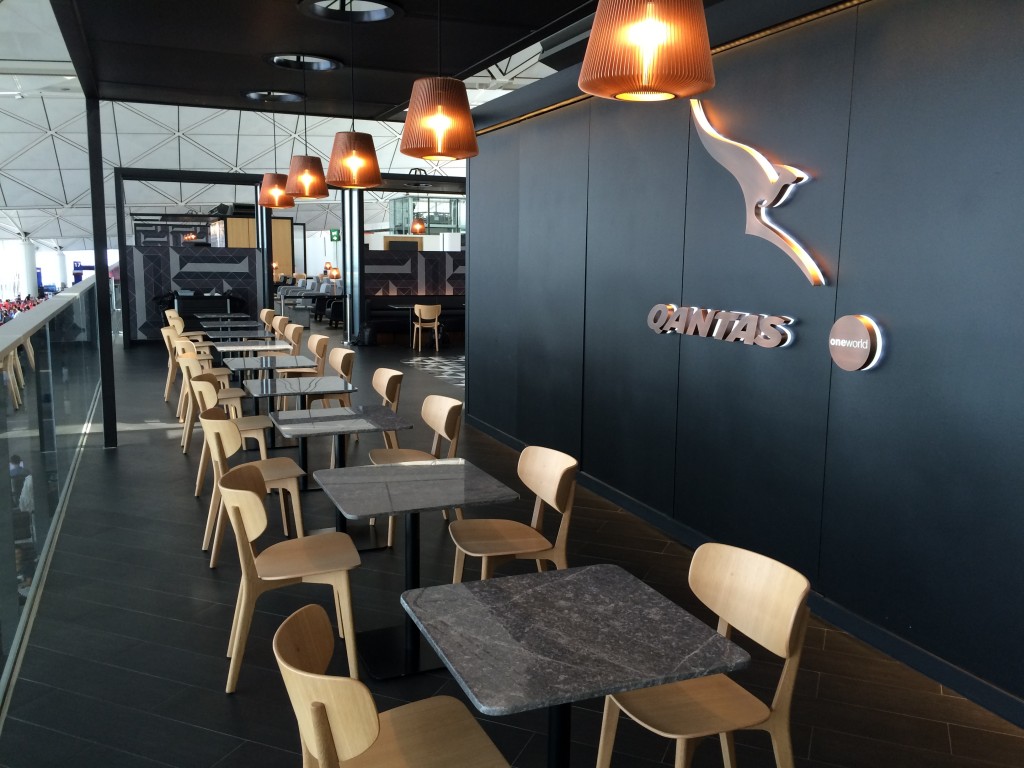 Boarding commenced at gate 30 and despite well-posted signs, quickly turned into a bit of a mess as people created queues in the gaps between lines. Fortunately, priority boarding allows passengers in Flagship First or Flagship Business to get ahead, pass through liquid screening and access the plane first.

There are two Flagship Business cabins on American’s 777-300ER, the first with just eight seats, the second with 44. The latest generation of the American Airlines business class seat is one of my favourite things about flying the airline long-haul; American Airlines has gone all out to offer hardware that’s on par with virtually any other carrier flying the long-haul routes from America to Asia, and each seat is a feat of comfort, ergonomics and technology. The cabin is laid out in a 1-2-1 configuration that gives all passengers direct aisle access and for window buffs like myself an average of two large windows, offering plenty of natural light during the day.

My lie-flat seat, 7A, on the port side of the aircraft, is pretty much everything you want in a business class and nothing you don’t. The seat features ample storage space, including the shoulder-height compartment where American Airlines’ Bose headphones are stored, and an open pocket at ankle level that’s great for shoes or slippers. There’s a wide armrest that’s perfect for resting tablets or laptops, a large 20.5-inch personal monitor built into the seatback, and easy-to-access USB ports and an AC point, making charging a breeze. There’s also plenty of room when the seat is in bed mode, ensuring a great sleep. A bottle of water and a chic amenity kit by Cole Haan, which includes all the essentials for flying, from a dental kit and eye mask to moisturizer and lip balm, were already waiting.

Similar to those used by CX, American’s lie-flat seats are 20.5-inches wide and are set in a reverse herringbone configuration. 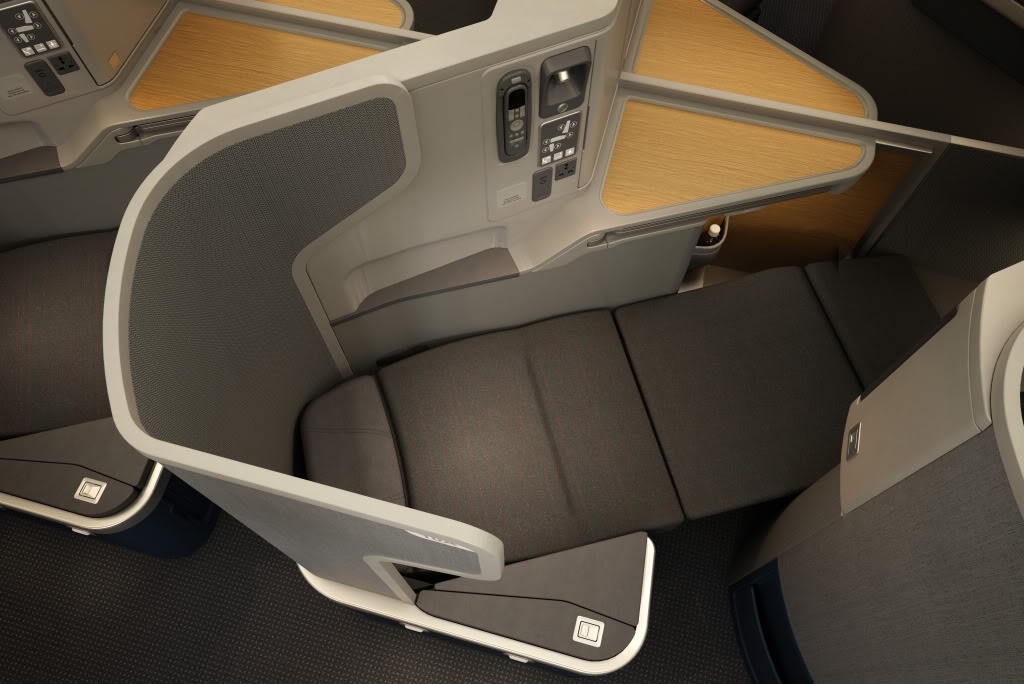 Despite crew being cheerful and chatty, service is the Achilles heel of American Airlines, although a younger generation of cabin attendants is slowly turning that tide. A single crew member dished out plastic glasses of champagne and newspapers before takeoff, and hot towels after, although it took more than an hour for the pre-dinner drinks to be served, with most crew otherwise ‘engaged’ in the galley for much of the 14-hour flight. When service did commence, it was more akin to a diner than a restaurant; staff were present and responsive but not particularly attentive – they were there but they weren’t really ‘there’. Sadly this is something that could be said for many major carriers today. However, with a great seat, lots of entertainment options, and a self-service galley, it’s very easy to fend for yourself.

The dinner service began with warm nuts and a well-made gin and tonic to toast the departure from HK air space. A starter of fresh vegetable spring rolls with green chili and honey dipping sauce was zesty and fragrant, though I decided to skip the seasonal salad, which had been doused in ‘Chinese’ vinaigrette.

I opted for the beef, which was a sizeable chunk of meat that was a little tough and overcooked though I suspect that might have been due to our 40-minute delayed departure (which was redeemed when the captain advised we would arrive 35 minutes early in LA!). The potato, by contrast, was a little slice of heaven, especially when matched with the Ken Chase-selected wines.

As this is a long flight, there are also snacks available during the flight, including the mezze plate; and beef dim sum with yi mein noodles, with mushrooms and chives. 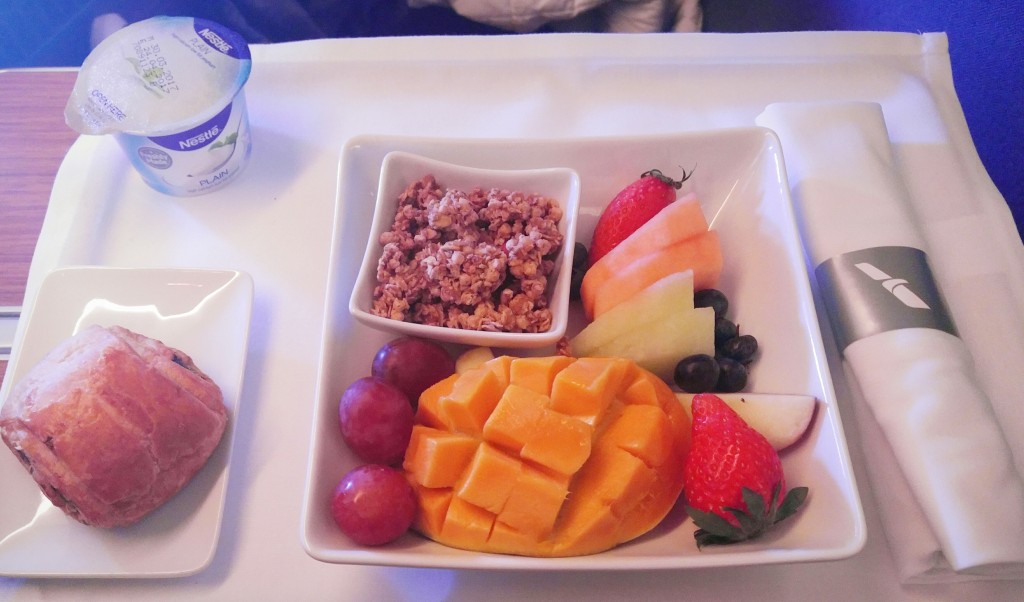 Although we were arriving in LA in time for happy hour, a ‘brunch’ service commenced 90 minutes before landing and included an avocado-mango smoothie, fresh seasonal fruit, yoghurt, pain au chocolate and the options of an American breakfast of scrambled eggs, unsmoked British bacon, roasted potatoes and herbed tomato; or a continental breakfast with seasonal fruit, yogurt and granola.

Overall I found the dining to exceed expectations with beautifully plated and great variety considering it all had to be secreted away in a tiny galley.

This is another place where American Airlines shines, as you would expect on any route to Hollywood. The large personal monitor accesses the airline’s extensive selection of movies, TV shows, games, music and audiobooks. If you prefer you can plug in your own devices to watch on the seat-back monitor. Inflight wifi, at a very reasonable rate of US$19 for unlimited data for the duration of the flight is also brilliant; I found the signal strength to be comparable to good mobile internet on terra firma and managed to sail through emails and Whatsapp messages easily.

True to his word, the captain had us landing in sunny Los Angeles half an hour ahead of schedule. This concluded a thoroughly enjoyable and restful flight and ensured guests contemplating another happy hour drink could do so in one of America’s most vibrant cities.

Hong Kong-Los Angeles return in Flagship Business from US$3,420 per person.