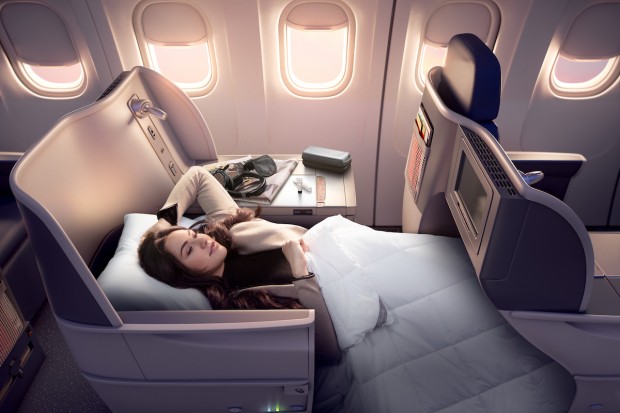 Rosemary Behan tries out a new direct daily service between London and her new home in Portland, Oregon.

In May 2017, Delta launched a new direct 10-hour flight between London Heathrow and Portland Oregon, allowing travellers the luxury of not having to stop on the east coast or fly up or down from San Francisco or Seattle. That service, which operated four days a week from May to October, was made daily in May this year.

Three days before the flight, I received an email asking me to select a main meal from four options – a nice touch given that even in business class cabins, popular choices can easily run out. Twenty-four hours before the flight, I was able to check-in online. I had pre-selected my window seat weeks earlier.

Portland International Airport, frequently voted America’s best domestic airport thanks to its relatively small size and user-friendliness, is low on the stress scale, so after dropping my checked luggage (passengers flying Delta One, the airline’s business class product, on this route are entitled to two checked bags of up to 70lbs or 30kg each), I was able to use the priority line in the combined TSA and security queue before looking for the lounge close to my gate.

As befits a mostly domestic airport, the Delta lounge is nothing special, but it did the job and was quiet. Delta One passengers travelling the other way, from London Heathrow’s Terminal 3 to Portland, have the use of the far superior Virgin Clubhouse before their flight.

Boarding was on-time at 5 pm and, this being less than two weeks after the daily flight launched on May 9, is light on passengers in economy, so the doors are closed and take off is on time at 6 pm, the ideal schedule for someone on US time, allowing time for a drink, dinner, a film and bed before midnight. 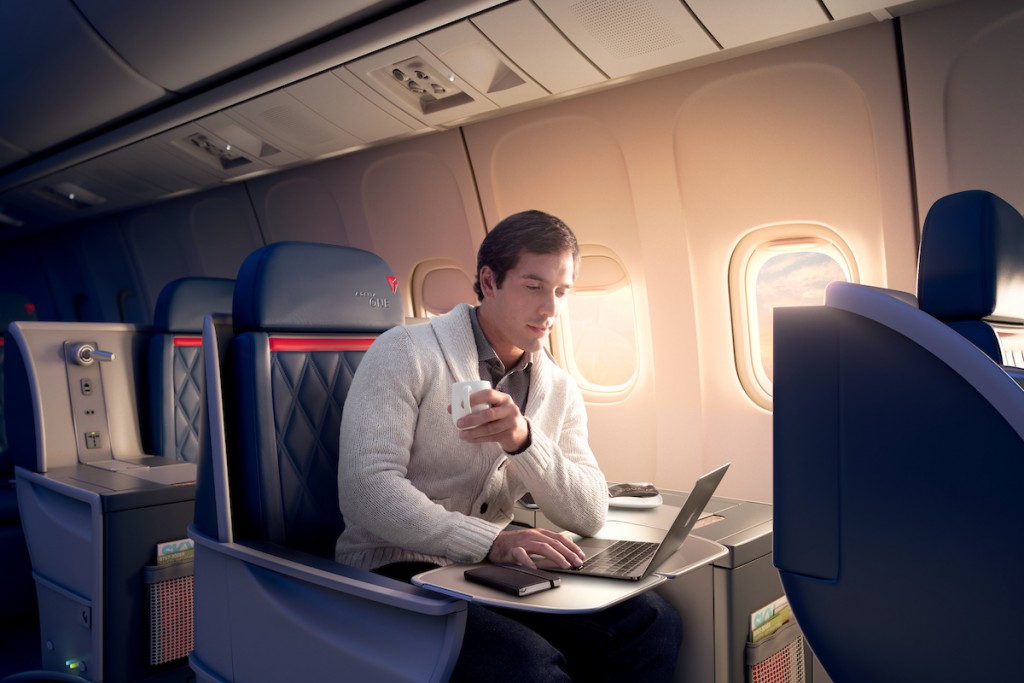 The Cabin and Seat

The plane is a Boeing 767-300ER, with 25 seats in business class in a 1-2-1 formation. Staff tell me the cabin interiors are a couple of years old and not Delta’s newest business class offering, which features partitioned “suites”. Still, the business class section isn’t too large, the bathrooms are unexpectedly spacious and for one who likes a window seat, 3A is optimal being in the middle of the cabin but completely off to the side beside the window (and not the window seat where people brush past you in the aisle). There’s a full horizontal recline and plenty of legroom. The in-flight entertainment system felt basic compared to airlines such as Emirates, but there were just about enough films to watch. Getting the table out to eat involved moving the items I had piled on the side shelf, which tilts in order to get the table in and out.

After take-off, I opted for a Delta Sunrise, the airline’s signature cocktail featuring gin, cranberry-apple juice and ginger ale. This was served with a mix of warm cashews, pecans, almonds and pistachios. The starter was a good trio of cold smoked tuna with soy mayonnaise and cucumber, a small salad, and carrot and ginger soup with dill crème fraiche. 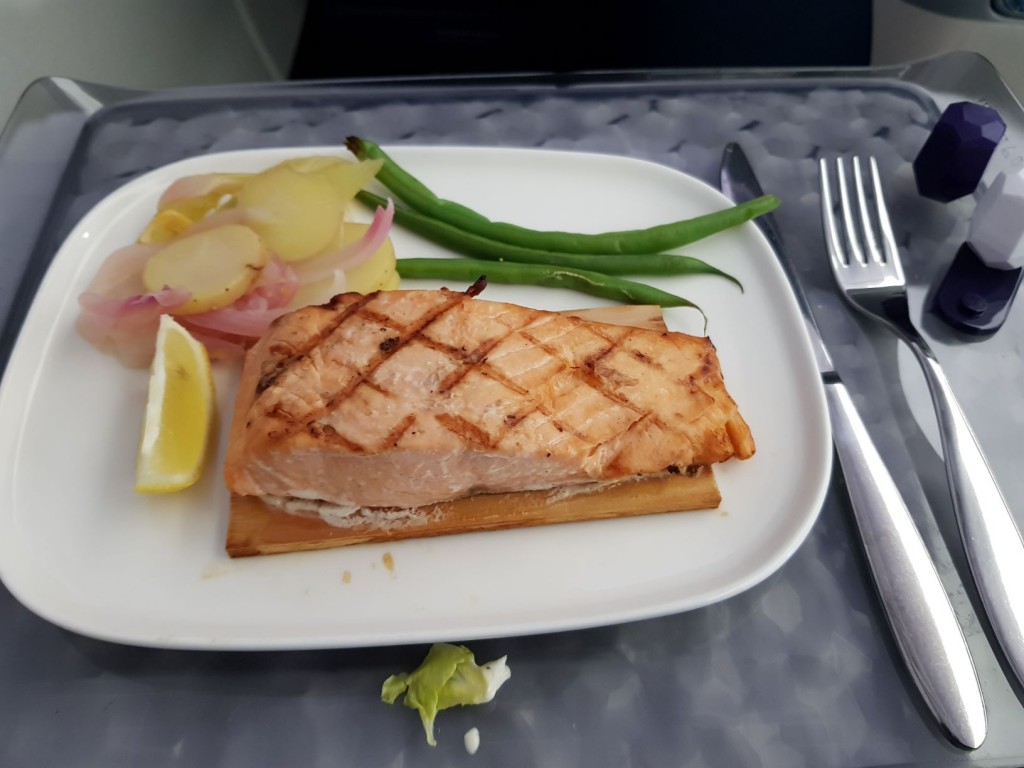 My main course, bourbon-grilled cedar plank salmon with potatoes and green beans, was impressive, and the white wine, a South African Chenin Blanc, worked well. For dessert, I opted for the cheese plate with a glass of Cabernet Sauvignon from Washington State. The desserts came down the aisle on an elegant dessert trolley and it was hard to choose between them.

I was served by a very kind, methodical and obliging female staff member who one wishes was on every flight (alas, that wasn’t the case on my return leg). Staff at the gate were also polite and addressed passengers by name, and we were thanked individually for our business towards the end of the flight. Limited free Wi-Fi, including iMessage, Facebook Messenger and WhatsApp is available, though I didn’t use it and had trouble connecting on the return leg. 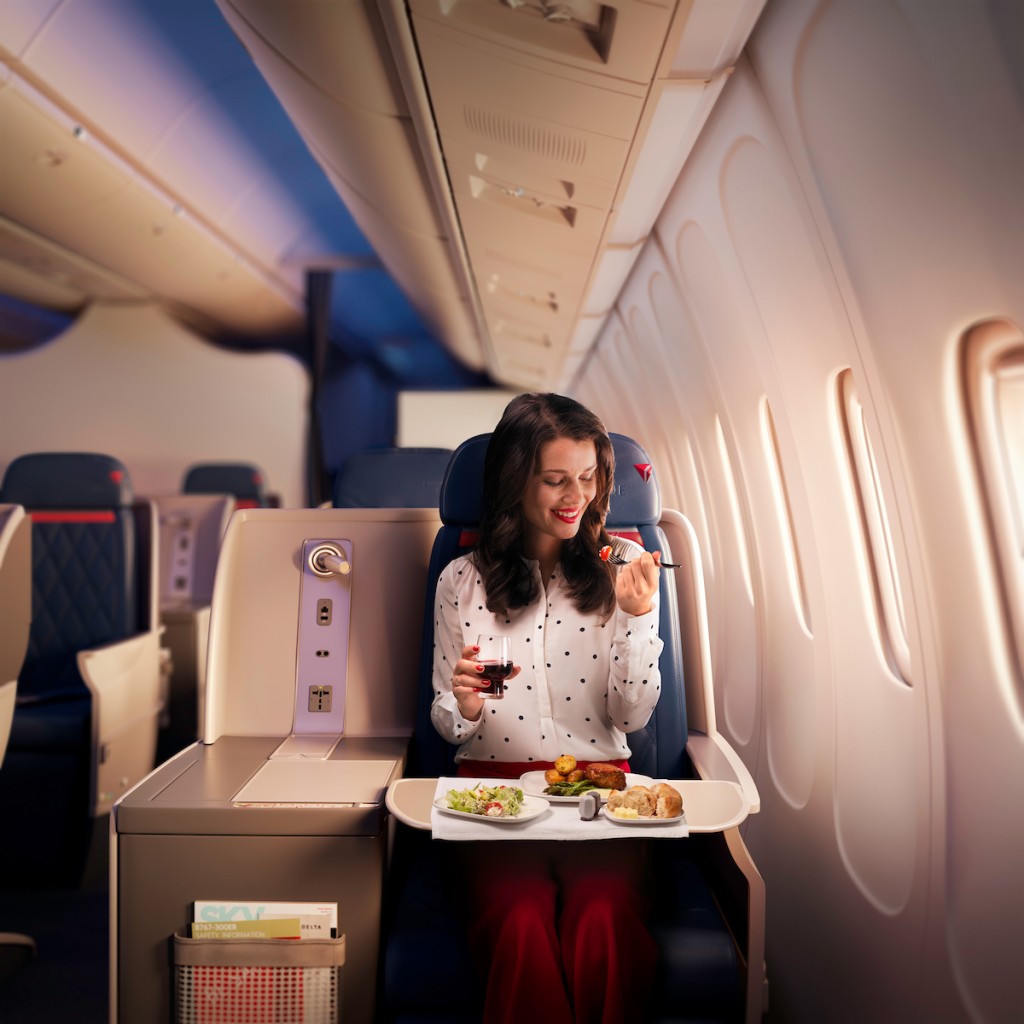 The cabin was fairly quiet and with the aid of the Tumi amenity kit containing Kiehl’s products, eye mask and earplugs, plus comfy pillows, I slept quite well for a few hours. The flight was extremely smooth and confident announcements from the flight deck were appreciated.

We landed slightly early at midday, and, once through immigration and baggage, I proceeded to the Virgin Atlantic Revivals Lounge next to the arrivals hall (helpfully, Delta had sent an email before my flight and handed me a flyer on the flight, telling me exactly what facilities I was entitled to use on each leg). While not comparable to the Virgin Atlantic Clubhouse, the Revivals Lounge is still a great feature, offering free 15-minute spa treatments, showers, an extensive range of non-alcoholic and alcoholic drinks, newspapers and, if only I’d been hungry, a full English breakfast.

Fly Delta between Portland Oregon and London Heathrow from US$770 return in economy and US$3,010 in business class.

Rosemary Behan is a British travel writer based in Portland Oregon. Having visited over 100 countries and living in the Middle East for 10 years, she now reports from the US for titles including The Times, The Sunday Times and The Guardian.