Air Canada Premium Economy is a great alternative to economy on those trans-continental routes, including Los Angeles to Toronto, discovers Nick Walton on a recent flight.

We checked in at Air Canada’s check-in counters at LAX’s Terminal 6 and were greeted by a lovely Air Canada staff member who (very patiently) helped us juggle our weight allocation, gave us suggestions on how to kill downtime and to use our meal vouchers when the flight was delayed (by 2 hours), and then helped with an upgrade to premium economy. It’s pretty rare to find staff that are so proactive and upbeat, and it really set the scene for the rest of the journey. Another perk of premium economy is two complimentary checked bags, which sorted our excess luggage woes.

After the lengthy wait, the boarding process at gate 68B onto the Air Canada 787-9 was painless and efficient, with premium economy passengers allocated a priority boarding zone that means we boarded a little quicker than the rest of economy. Thirty minutes later we departed on our 4-hour flight to Toronto’s Pearson International, climbing out of sprawling Los Angeles and crossing the San Bernardino Mountains into the desert.

Air Canada’s Boeing 787-9 Dreamliner has a three-class configuration, with 30 lie-flat seats in business class, 21 recliner seats in three rows in premium economy, with a configuration of 2-3-2, and 247 seats in economy. The cabin is spacious and refined, with Air Canada’s signature dark grey interiors set against the aircraft’s pale white fuselage. My window seat had a 7-inch recline and a width of 19.5-inches. It also offered a pitch of 38-inches (7 inches more than economy), meaning plenty of leg room. There was a USB port for that essential phone charging, as well as an AC port, an adjustable headrest, and crew offered basic amenity kits and comfortable pillows and blankets for those looking to get some sleep. 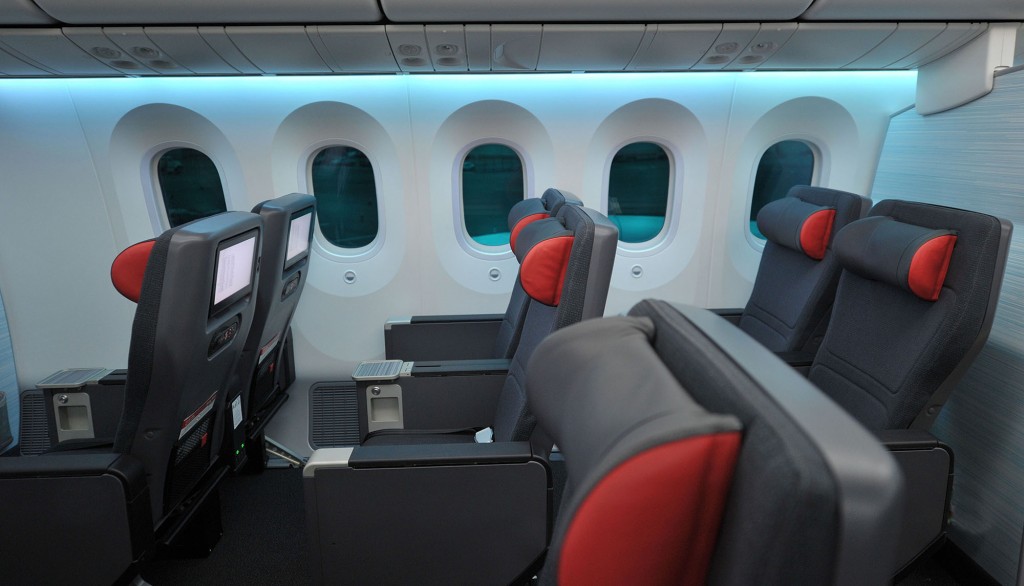 The crew began the lunch service soon after takeoff, with a cheerful attendant named Jereme offering a hot towel and pre-meal drink, with choices ranging from spicy Clamato juice and Canadian Molsen beer to a full range of spirits and wines selected by sommelier Veronique Rivest. I went with a Sonoma Riesling, which Jereme regularly topped up throughout the flight.

Lunch began with a kale, fennel and baby spinach salad with spicy pickled carrots, dill, and balsamic dressing. This was followed by a choice of butter chicken with herb basmati rice, seasoned spinach, chickpeas, and red pepper; or cheese manicotti with a Niçoise sauce and mozzarella. The butter chicken was soul-soothing and well-proportioned and was served tray-style with the salad and a slice of cappuccino cheesecake. This was an elegant, efficient and thoroughly enjoyable lunch service, especially when paired with the Riesling and the extensive selection of films on the Air Canada entertainment system.

I was very impressed with the Air Canada service, from the check-in, right through the boarding process and on to the flight. North American carriers get a bad rap when it comes to service and it’s something that a few carriers (including American Airlines and United) are trying to shake off. I’ve travelled with Air Canada long-haul many times and always found the crew to be great, but I was even more impressed that cabin crew was able to make the relatively short LA-Toronto hop so pleasurable. 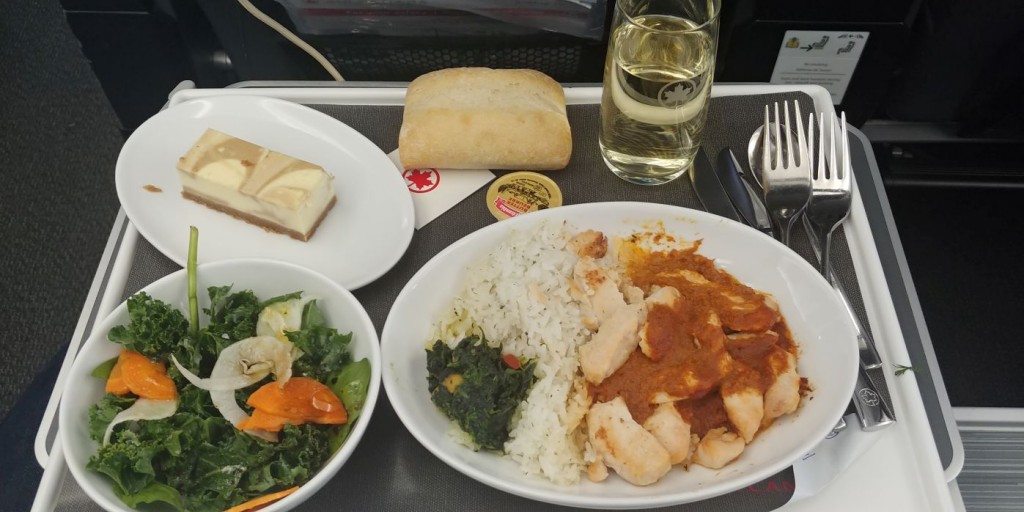 Not only does the Air Canada inflight entertainment system, accessed via an 11-inch touchscreen set into the seatback, have a surprisingly good selection of television shows and movies, but it is also far easier to navigate than systems used by Korean Air and many other carriers. There is also a single-pin audio jack, meaning I could use my Bose QC35 noise-reduction headphones.

If you’re flying across the continental US, Air Canada’s premium economy makes a lot of sense – you’ll dine well, be entertained and waited on hand and foot, for a very reasonable fare bump. Who could ask for more?

Note: The author travelled on a full fare premium economy class ticket without the airline’s knowledge.