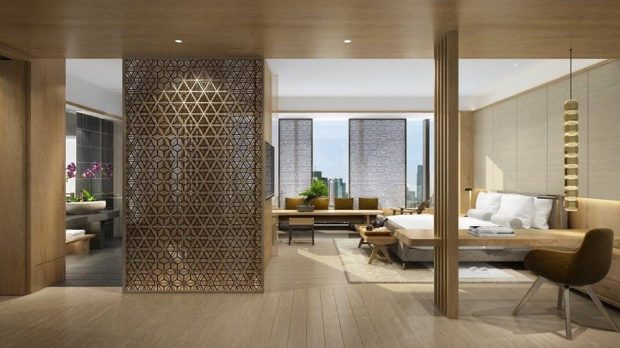 The Hotel Okura Tokyo will reopen as The Okura Tokyo on September 12, 2019, following a full makeover and rebrand of this iconic Japanese hotel.

Since opening its doors in 1962, Hotel Okura Tokyo cemented its place in the Japanese hospitality scene, welcoming distinguished guests and pioneering developments in the industry.

In its new iteration, The Okura Tokyo will house the Heritage Wing – inspired by the original hotel – and the new Prestige Tower. Both formats will continue the Okura legacy of excellent service and facilities, and offer a combination of traditional and contemporary luxury. In total, the hotel will now house 508 guest rooms and suites across the two wings.

The Heritage Wing will have its own reception area, a serene space that evokes Japanese traditions with Sanjuroku-nin kashu panels that are modelled on the “waka” poetry scrolls which have been designated a National Treasure. Guest rooms here feature plenty of earthy tones and have been designed with an eye to Japanese style and minimalism. High-floor rooms look over the surrounding greenery, while rooms on lower floors offer balconies; all rooms come with an ensuite steam sauna.

The Prestige Tower is a homage to contemporary Japanese design. Decorations from the original Okura lobby –  like a hexagonal Okura Lantern, lacquered tables, and world map and clocks – have been carefully integrated into the modern-look lobby here. The guest rooms in this wing are set between the 28th and 40th floors of the building, and offer spectacular views over the city of Tokyo. The Club Lounge is also housed here, and is offered as a perk for guests staying in the tower’s Club Floors or in the Heritage Wing.

The new hotel will also offer a range of dining and drinking options that would be well-suited for relaxed evenings with friends or business dinners with clients. The Heritage Wing will feature the beloved Yamazato Japanese restaurant, along with the new Nouvelle Epoque French fine-dining destination.

At the Prestige Tower, guests will be able to enjoy Chinese cuisine at Toh-Ka-Lin, teppanyaki at Sazanka, and all-day dining at Orchid. On the 41st floor, the Starlight bar and lounge will offer an array of cocktails, wines and other drinks alongside spectacular cityscapes.

On the 27th floor, the Okura Fitness and Spa will offer a wealth of luxurious treatments that combine Eastern and Western wellness traditions, and will be the first spa in Japan to use products by renowned French brand Annayake.

The Okura Tokyo is already taking restaurant and room reservations.