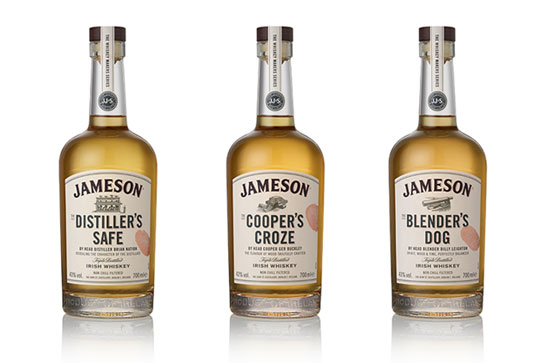 Jameson has launched a brand new range of super-premium whiskeys – The Whiskey Makers Series. Perfect for business travellers to pick up on the go, the new series comprises three different whiskeys created by Jameson head craftsmen and named after their favourite piece of tools: The Distiller’s Safe, The Cooper’s Croze and The Blender’s Dog.

The Distiller’s Safe is a true showcase of the original copper pot still distillate. A purist of whiskey making, head distiller Brian Nation explores the influence of the copper on the new-make spirit, using a maturation process that skillfully preserves the qualities of the original distillate, allowing the flavours developed in the pot still to take centre stage. His tool of choice – a spirit safe – allows him to fine tune the whiskey’s style at any point during the distillation process and the resulting blended whiskey carries distinct sweetness from barley sugar and gentle notes of apricot, cinnamon and melon.

The Cooper’s Croze explores the influence that maturation in casks has on whiskey. Head cooper Ger Buckley prized possession – a croze – passed down through his family, is used to make the groove where the head of the cask is positioned. The resulting blended whiskey is matured in virgin American oak barrels, seasoned bourbon barrels and Iberian sherry casks, a combination that delivers vanilla sweetness, rich fruit flavours and a balance of floral and spice notes.

The Blender’s Dog is a tribute to the fine art of blending. Head blender Billy Leighton is tasked with uniting the crafts supplied by distiller and cooper to create harmonious, perfectly balanced whiskeys. His go-to instrument – a “dog” – is used to collect whiskey samples from the casks, allowing him to bring together complementary spirits from Midleton’s extensive range of maturing stock. The Blender’s Dog is a perfect balance of spirit, wood and time; a rich, rounded whiskey with butterscotch sweetness, spices, tannins and an exceptionally long finish.

In addition to The Whiskey Makers Series, Jameson’s restructured portfolio also consists of a range of Heritage whiskeys and The Deconstructed Series, with the original Jameson Irish Whiskey at the core. www.jamesonwhiskey.com