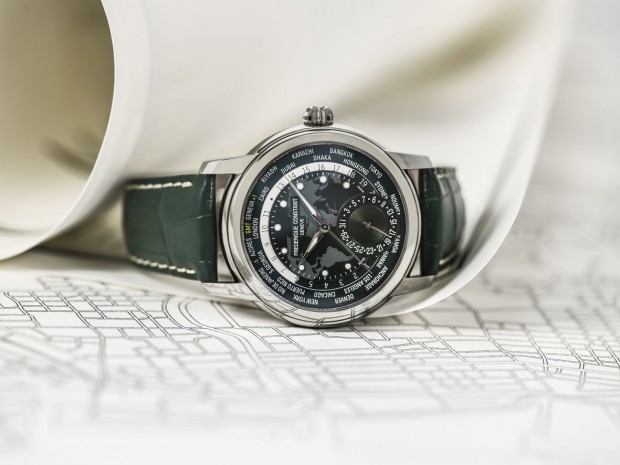 Presented in a striking green hue, Frederique Constant has released the newest incarnation of its Classics Worldtimer Manufacture, the ideal timepiece for business travellers passing through time zones.

Offering wearers the ability to keep tabs on time at home as well as in 24 cities around the globe, the newest version of the iconic Classics Worldtimer features a dial with an intricately-etched world map, the key destinations encircling the dial, and a date-by-hand dial positioned at 6 o’clock.

The new model is powered by a FC-718 caliber movement, an extraordinary piece of machinery not only because it is in-house designed, developed, and produced but also because its Worldtimer functions, as well as the date, are all adjustable via the crown itself, with no additional push-buttons. Frederique Constant was the first to announce such an accomplishment and three Worldtimer editions later this innovation is one of the top-selling arguments for this watch.

This timepiece displays two separate discs, one featuring a 24h day-night indicator and a second one with the 24 cities. As a Manufacture movement, the FC-718 caliber is decorated with Perlages and Côtes de Genève, and holds a 42-hour power reserve. The green timepiece is complete with a green alligator strap with white stitches.

10 Predictions for the Airports of the Future

We Review Etihad’s Business Class on its 787 Dreamliner